This world is divided by social classes whether we want to believe it or not. Generally there are the lower, the middle, and the upper. Social classes are constructed from the mix of wealth and power defined by black’s law ,those who are fortunate to be born into the upper class will inherit those advantages, those who were born into the middle class would either inherit those same advantages limited to the middle class or find themselves struggling. And those were born to the lower class would more likely staying in that class. However there is always a possibility for anyone to ever reach a higher class. Being born in whatever situation you’re born in does not mean it’s the definite future. More likely these chances are available based off of serious factors such as education and personal talent or even work ethic. Our community partner, Bailey from Yes Magazine, believe that certain advantages are given to certain communities based off of their social class. If opportunities were given base of the equity everyone have a same rate of success.This world derives off of social class there is no other way to ultimately distinguish people other than so. Whether it what color they are and what gender they are,it will always be distinguish between a social class as either an excuse or an explanation as to where they are in life. For example if a white man was to make his way to become a CEO one person however if it were to be a Latina women to be a CEO of a company there would be massive accusations she was harder worker. Now that might be the case however there could be some situations where the roles were switched. This is a very social class comes in to be used as quick assumptions that could either be true or false.

Targeting primarily children and teens for their likeliness of vulnerability to the effects of social class, I asked Bailey directly on her thoughts of this since she and Yes Magazine directly cover these topics in their articles from time to time. I asked her how does social class affect children and teens in urban communities if they’re given the same opportunities as those who are not. She answered with, “ I think that if children and teens in urban communities were given the same opportunities, the same resources, and the same encouragement that kids in predominantly white schools get, the education gap would be significantly lower. It is unfair to blame the kids in those neighborhoods who aren’t able to access the same things for their shortcomings. If we allowed kids the same opportunities we could reduce racial inequity.” I was able to personally connect to her response because at a young age, i transferred schools. From south Seattle to south Everett, i quickly noticed how much better off of an area there was. A brand new school that was built in 2005 versus a school built in the early 1990s. The budgets were different because i recognized that in my new school provided most if not all supplies for a class to use while my old school did not. Communities who are about 20 miles apart don’t seem as close when you view them side by side. This is one of many example that could be used to show how much of an impact social class plays towards a community as a whole.

Individually, children who have access to television, phones, or any other means of technology are more likely to be able to access education outside the classroom. This poses a greater advantage for other than those children who cannot have access to such. “Parents were eager to hope that television could teach their children something other than which breakfast cereal that has the most crackle. At the same time Sesame Street relieved them of the responsibility of teaching their preschool children how to read matter no small matter in a culture where children are apt to be considered a nuisance.” (Pp 142-143 Amusing Ourselves to Death, Neil Postman). While it’s no one’s fault really, technologies such as television, provide kid-friendly shows, pose an advantage against those who couldn’t. For parents who can’t, just puts a strain on them especially if they’re in the workforce and cannot provide or make up that extra education one on one with their child, again leaving those children behind.

By playing a huge role as to how a communities shape, there are views that see social class as a culture. Why this is, is because the gap from the rich to the poor has been growing. You can take a look into immigrants. Those who come to the United States come here for a better life no? Ideally they’re drawn to communities that have similar people. However that does not expand because then they would be stuck in the community unable to advance due to lack of opportunities to expand for the better. “S.L Wong, the Director of an English language school in San Francisco Chinatown, explain that recent immigrants find themselves locked in a low wage restaurant labor market: most immigrants coming into Chinatown with a language barrier cannot go outside is confined to the mainstream of American industry.” (p. 416, A Different Mirror, Ronald Takaki). Unintentionally those immigrants have drawn themselves into the lower range of the social class because of their limited abilities to adapt to the middle or upper-class. What that says they’re on able to expand her talents their language and your skills is very difficult and very few are able to span out. 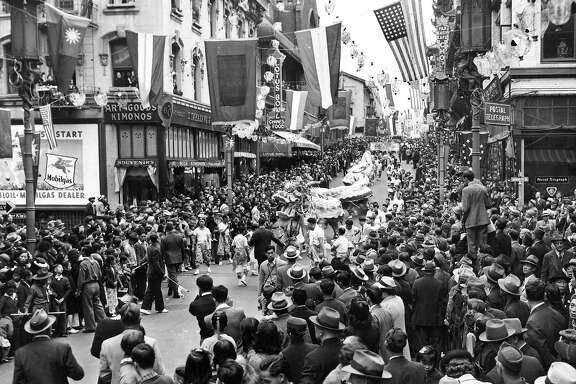 Our S.F.: Chinatown rises from ashes, after decades of struggle [Photograph]. (2015, October 3). OUR SAN FRANCISCO, https://www.sfchronicle.com.

While I am able to pull past reference of how social class can deeply affect communities. There are subtle way that social class differences play the part. In recent weeks, a Race conference took part. Diverse as it was, I felt that why social class played a role is reflected through small details. Had this been hosted by an upper class sponsor, the venue would be located somewhere else, food options would be more, guest speakers would be more and even more well known, to even decorations. Upper class means well off, privileged, and powerful. With power comes with recognition as well as credibility. Power comes to play by using this event again, this even would have had more attendants. All through social class and the pyramid-like structure that is holds.